Explore Peru: 2 Days in Lima - The City of Bones!

I'm an emotional person. For better or for worse my eyes tear up, much to my embarrassment, when I'm happy, sad, angry, saw something breathtaking, or for no reason what so ever. My three week backpacking trip across South America, starting in Lima, Peru, was going to be a test for my tear ducts for varying reasons.... thank gawd I packed tons of small packages of tissue! Let the emotional rollercoaster begin.

I flew into Lima on an early Tuesday morning last February. I've been dreaming of doing this trip for too many years too count and actually planning it for months. I haven't traveled for a long time for reasons that seem dumb now, but this trip changed everything, and travel will never take such a long vacation from my life again. The first of many teary-eyed moments was when I was waiting for my backpack to come down the luggage pickup area in the tiny Lima airport. I just couldn't believe that I was finally doing this trip. I was met by a friend, who already booked a night at a hostel near the airport and had a cab waiting, which my airplane-frazzled mind was grateful for. 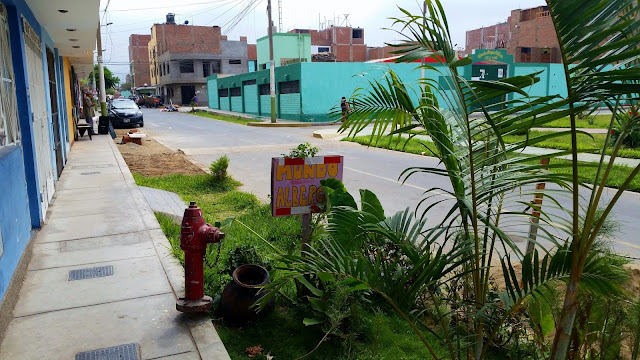 My first morning I awoke to bright sunshine, dry heat, and lots of dogs in the street. So begins my two day whirlwind self-tour of Lima. Luckily for me, the hostel owner knew a reliable taxi driver... his brother. I heard horror stories about hailing a taxi on the street and almost every article I read about safe traveling in South America suggested to always get the hotel or place you are staying to call a cab. Travel Tip: Peru taxi's do not run on a metre system. Always negotiate the taxi cab fare before getting in the cab. During the taxi ride from my the hostel to the hotel I will be spending the rest of my time at in Lima, I finally got a sense of how BIG Lima was and the amount of people and cars was mind boggling to me. I was not prepared for how much I would enjoy visiting Lima I really wasn't ready for the sheer size of the city! It is one of the largest cities I have visited so far and took some getting used to. The sights, smells, sounds, and hoards of people was a little overwhelming at first but Lima is an amazing city to explore, and one that I highly recommend for any traveler to South America to visit.

Hotel Paris was clean, cheap and near downtown Lima, which was within walking distance to most of the major tourist sights. Most tourists and visitors opt to stay in the Barranco or Miraflores districts, which are known to be safer, but were also more expensive. And with only two days to explore Lima, those areas were too far from the all the places I wanted to visit and I rather walk and explore the streets for my two days in Lima instead of sitting in traffic (which there is ALOT of in Lima:)

Day One
I just wanted to find my "South America backpacker groove" after traveling from Toronto, Canada in the middle of winter, so the goal was to just get out and explore the streets a bit, exchange some money, and EAT. I had some hard core travel ahead of me with no plans, except for my return flight date out of Buenos Aires, Argentina (the other side of the continent) in three weeks!

After checking in to the hotel and dropping off my bags, around 10am, I was delighted to find a local cafe and restaurant right beside the hotel that serves a full breakfast for about ( s/. 10 nuevos sols which was less than $3.00 USD). Fueled up on fruit, eggs, and coffee, my friend and I set out with a map the hotel gave us and a little pep in our step. The first thing I noticed, was that EVERY SINGLE PERSON I passed, stared at me, including people passing in cars. I know I look different from the usual Peruvian person - I'm pale, tall, and have red hair - but it can get unnerving after a while. My friend even commented on how everyone stares at me, and he usually doesn't notice things that don't revolve around himself (sorry James, you know it's true:) The second thing I noticed, was the constant car horn honking. Drivers honk when they turn, they honk when they stop, they honk when they are they only car on the street. They are always honking! Oh and they don't really obey traffic signals, so beware when crossing the street!

After only losing our way once or twice, we arrived at Plaza San Martin and several currency exchanges. We both are traveling with American currency, which is the easiest to exchange in South America. Travel Tip: I got a better exchange rate at the the currency kiosks than I would've got at a bank. I got almost s/. 700 nuevos sols for $200 USD. Plaza San Martin was a great place to people watch and take in the architecture. It always makes me smile that in such a hot, dry continent, I almost never see anyone wear shorts (or short sleeves) or even women wearing short dresses or skirts outside of a work uniform. Plaza San Martin is a beautiful public space park and a World Heritage Site. In the middle of the Plaza is a monument of Peru's liberator Jose de San Martin.

We then made our way  to Plaza Mayor, also known as Plaza de Armas. This is the tourist hub. The Plaza is surrounded by the Government Palace, Catherdal of Lima, Archbishop's Palace of Lima, The Municipal Palace, and the Palace of The Union. There is also an outdoor market just up the street and several cafes, restaurants, and museums in the surrounding neighbourhood. We walked around for a bit and decided to visit the small Museum de Minerlas (admission price s/. 10 nuevos sols). It was a small museum packed with interesting minerals and rocks as well as ancient and historic statues, artifacts and clothing. It was the perfect introduction into the world we have entered into for the next three weeks. And then over a Pisco Sour (the unofficial national cocktail) we decided to take a city bus tour, that was being offered across the plaza. I highly recommend taking a city bus tour since Lima is one of the largest cities in the world and second biggest city in South America, it is the only way to get an overview of the city. Travel Tip: Make sure to get an English speaking tour if you don't speak Spanish and don't take the tour if is coincides with rush hour. I was stuck on the bus for over 2 hours in traffic around 4pm and it was torture an caused my tears to well up in frustration! I made my own way make to the hotel as it was getting dark and the downtown streets of Lima are not the safest place to be after dark.


Day Two
After a delicious breakfast at the cafe next to the hotel, I decided to visit the main sights which included several churches and cathedrals and thousands of bones. First stop was Santuario Santa Rosa (admission s/. 10) which was absolutely stunning. The gardens were beautiful and the view from the bell tower is not to be missed.

I also visited Cathedral of Lima and the Archbishop's Palace (s/. 30 for both places). I only took one structured tour and it was the English tour at the Archbishop's Palace. I learned alot about the different schools of art and about Catholicism ( I am not catholic). The Cathedral of Lima was beautiful and the catacombs were a definite highlight for me.

After some lunch, we made the trek to The Monastery of San Francisco (s/.10) whose catacombs were absolutely amazing and was well worth the admission price. The next stop was the market across the street from The Monastery. Lima is known for it's huge outdoor and indoor markets and this one was a great way to pass the time. I enjoyed some chocolate beer, bought some souvenirs, local artwork, and I had to walk away (with a tear in my eye) from some amazing boots which didn't come in my size :(.

I ended up back at Plaza Mayo and was exhausted from walking around in the heat all day. After a quick nap and shower back at the hotel, I got dressed up and grabbed a cab to go to Larco Museum to enjoy a nice meal (s/. 80 each). The restaurant is located in the museum's gardens and the food and ambiance was absolutely stunning! I highly reccomend anyone visiting Lima to check out the restaurant. Unfortunately it was too late to visit the museum, so I packed and left the hotel early the next day and explored the museum (s/. 30) before my flight to Cusco at 3:00pm. And of course enjoyed one more cocktail in the beautiful restaurant. Museum Largo was an absolutely amazing museum that had some fantastic South American artifacts and and interesting erotic art gallery and well worth the second trip back.

I enjoyed my short visit to Lima and would love to go back to explore some more. I met some fantastic people from a police officer who was eager to learn about Canada, to a homeless man who regaled me with stories while he guided me to The Church of San Francisco; to a girl who was studying English and wanted to practice her skills (and gave me some great travel safety tips), to the amazing guide at the Archbishops Palace and because of her I will always be able to spot a Cuzco School of Art style painting.

Have you been to Lima, Peru? What were your favourite sights?

P.s!: I visited during February, which is considered the low season. That means the tourist sights were not packed and the hotel and flights were cheap. If you are not going to hike the Inca Trail later (which is closed during February), I highly recommend visiting during this month.