It's been such a busy two weeks for me, that I missed last week's Happening Weekend post. So sorry, but life (and sickness) gets in the way sometimes. But this weekend there are plenty of amazing and cool things to do in Toronto, including one of my favourite festivals - BuskerFest! So put on some trendy comfy shoes, pack some snacks and get out there and enjoy the sunny days of summer before they are gone! 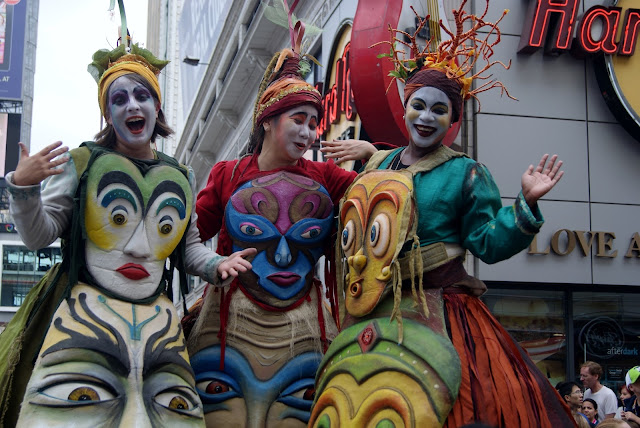 Here are my top picks for events and happenings in Toronto!:

Lifestyle:
A cast of colourful characters performing death dying and magical feats converge on Yonge Street starting Thursday. BuskerFest has closed down Yonge Street between College and Queen with it's variety of street performances, face painting, and more. I will see you there!

And if Buskerfest is not colourful enough for you, head over to Woodbine Beach on Sunday for Toronto Colour Festival. In a show of solidarity and equality, douse friends and perfect strangers in coloured powder!

The start of the end of the summer began last week when the CNE opened. From fairway rides and games, live concerts, and thousands of vendors, there is something for everyone at The Ex!

It's the last Sunday of the month which means it's time for PS Kensington! Kensington Market's streets close to vehicles and opens up to street performers, vendors, and more!

And if you love all things undead, throw on some blood soaked some clothes that have been buried six feet under and join The Toronto Zombie Walk Funeral and Wake as they ramble towards the CNE from the Royal Theatre on Saturday!

Exhibits & Culture:
Don't miss out on visiting the stunning Stephen Andrews POV exhibit at the AGO. Sunday is the final day!

Saturday is also the last day to see the Boldy Baker Exhibit at The Museum of Inuit Art. Don't miss out on visiting this unique exhibit.

Music:
Head over to Toronto Islands and pitch a tent for a weekend of sleeping under the stars while taking in some live bands! Camp Wavelength begins tonight and ends Sunday.

P.s!: If you don't feel like being surrounded by thousands of people a the many great events around the city, then pack a lunch and explore Toronto! There are countless of amazing things to do and places to see, checkout my Explore Toronto page for some ideas!