Over the past year, pop art has exploded onto the Canadian art scene with a resurgence that I haven't noticed in a longtime. From Douglas Coupland's simultaneous solo exhibitions at MOCCA and the ROM earlier this year to the amazing Jean-Michel Basquait exhibit at the AGO, it feels like pop art has gained popularity again. And for the past few months, Toronto has been home to Canada's largest Andy Warhol exhibition, Andy Warhol: Revisited, at a pop-up art gallery near the corner of Bay and Bloor streets downtown Toronto.

I finally had the opportunity to visit Andy Warhol: Revisited and was transported to Warhol's world, if only for a short time. 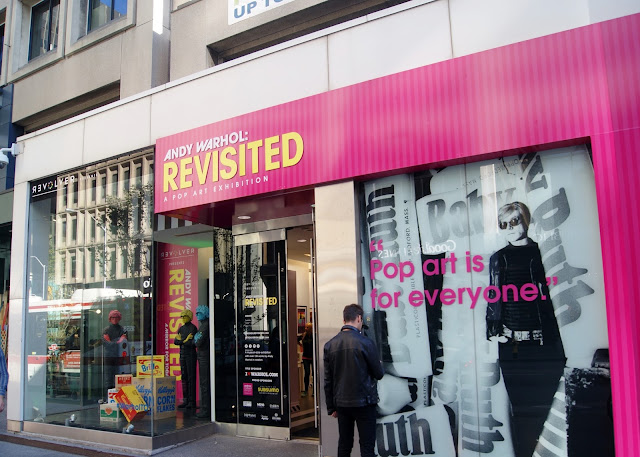 Over 120 curated works from the Revolver Gallery are displayed including the iconic Campbell's Soup Cans, Marilyn Monroe portraits and original Polaroids from the Andy Warhol foundation.

The exhibition space has a 1960's retro feel complete with silver sofas and archived video of Andy Warhol interviews. For less than a cost of a TTC Day Pass, everyone from die-hard Warhol fans to the pop art curious will certainly delight on revisiting Andy Warhol and his work. Andy Warhol: Revisited runs until December 31, 2015.

P.s!: Just inside the door is a wall of soup cans that is begging for a selfie to be taken in front of it and get your own 15 minutes of fame. I think Andy would've approved!