The Museum of Canadian Contemporary Art (MOCCA) is moving away from its current home, where it has been a staple in the artsy West Queen West neighbourhood since 2005. To pay tribute to this amazing museum and send it off in style, MOCCA's final West Queen West exhibition, Dean Baldwin: Q.W.Y.C, is a two month party and anyone can join! 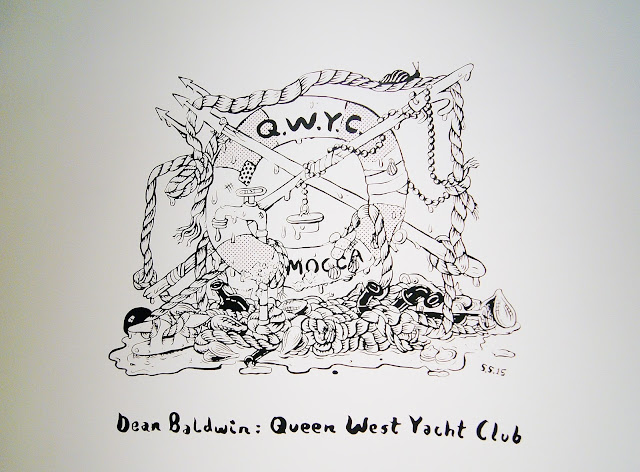 Q.W.Y.C. stands for Queen West Yacht club, a fictitious social club that will host several performances and events through the duration of the exhibit.

Montreal-based artist Dean Baldwin is known for creating relational art, where visitors are immersed into the installations, often are asked to participate, and become a part of the artwork themselves (at least for a short time). For Q.W.Y.C. Baldwin reconstructed Chalet (2012/2014/2014), a nomadic cabin constructed and reconstructed several times, picking up items along the way. Chalet is the entrance or "cork" to Ship in Bottle (2011), a 1952 Nordic Folk Boat displayed on it's side in the large open exhibit social space. The ship is full of items that any shipwrecked person would love to have. It's interesting to see the ship at full sail, but landlocked on it's side. Baldwin has created a fantastical yacht club for people who don't own yachts!

One of the most interesting pieces is outside in the courtyard, placed in front of picnic tables is The Queen West Memorial Fountain (2015), is made from objects found in the surrounding neighbourhoods, and will be torn down once MOCCA closes. On the wall beside the fountain the large ominous Jihyun Jung: Demolition Site mural still stands. I found this exhibit left me both happy and sad. I smiled at the humourous installations but I'm sad that this amazing museum has to move from one of the coolest neighbourhoods in the world to make room for, you guessed it, condos! It will be moving to the historic Automotive Towers located at 158 Sterling Road in the Lower Junction area. Dean Baldwin: Q.W.Y.C. ends August 23, 2015 which is also the last day MOCCA will be open on Queen Street West.

P.s!: Don't forget to check out Drama Queens, a short satirical and insightful film, showing in the smaller exhibition space. Also check out the many Q.W.Y.C. events happening up until the final day!